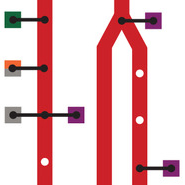 Playing with subway map aesthetics has long been an interest of mine, factoring heavily into some of my design for Ovuline among other projects.

My interest stems in part from an interest in depicting networks and part in an interest in nonlinear storytelling. Subway lines are full of optional connections and branch divisions at what was up to a certain point a common experience for all travelers. Similar architectures underlie much of interactive story and web design.

One challenge in depicting any particularly long path spatially as opposed to temporally is the tendency to get, well, long narrow paths. On the web you can scroll through these and in video you can animate their passing, but they aren’t as readily adaptable to static representations in other aspect ratios.

Using Boston’s Red Line as a case study, I intend to take a vectorized version of the subway map I’ve recreated and play with breaking the line at various points while maintaining some of the logics therein.

The above, in the dimensions of a Facebook cover photo, takes the length-wise line and, at each point where it would shift out of frame, continues the line to the right, effectively creating columns that follow top-down and left-right reading conventions.

Future experiments will play with warping and bending instead of breaking, and ultimately try to explore utility in depicting the subway line in non-traditional ways, to join what is already a growing field of precedents. The folks at Stone Brown Designhave done some explorations with altering the spacing between stops as proportional to time and, Michael Barry and David Card have also done intriguing and interactive visualizations of the Boston subway based in open-source datasets.