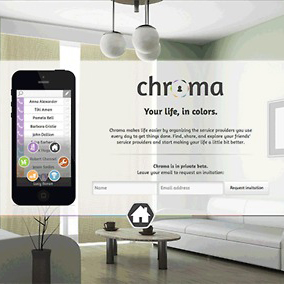 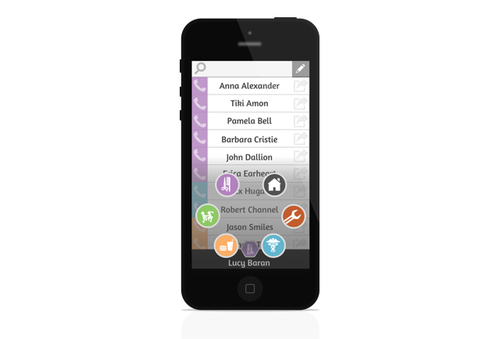 Chroma is an app that allows the user to access contacts by means other than name and also to passively share those contacts with friends or networks. Looking for whats-his-face, that designer you used, but can’t remember his name? Search by tag. Want to see who your friend used for a babysitter but you know she’s on vacation and is hard to reach, look no further than the contacts she has made public. The interface includes a touch to pop-up quick access menu with icons the user builds their own sorting associations with and may access contacts also by visual associations further enhanced by color motifs and relative spatial locations that carry throughout the app. 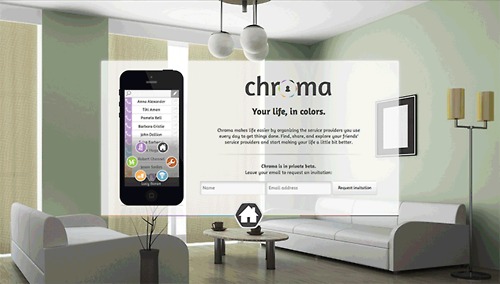 Chroma speaks to just this, your life, via your service contacts, in colors. As the word is typically used often only in circles that deal with design & video, it may more easily take on a new meaning for its intended users.

It also calls to mind a secondary association with a pre-existing tool people use to browse information, Google’s Chrome web browser.

The ending vowel may also serve to give the name a slight tone of sophistication, and the word being six letters also mirrors that the app uses 6 hubs for sorting one’s service providers.

The icon standing in place of the “o” in Chroma, may break out for standalone use as an app icon, a favicon, and leaves open the possibility to reference the app without using the full name.

The silhouetted contact icon is also designed to resemble a keyhole to suggest that the app is a means of unlocking the latent power of your contacts.

Six outward color rays mirror the six hubs and their position relative to each other and suggest the contact may move out in all directions since one of the defining features that make the app unique will be an eased method of sharing service providers.

The shape is a hexagon inscribed within a rotated hexagon, which also presents itself as a motif in the user interface that calls up the 6 hubs arranged in a hexagon layout themselves.

To make the colors pop, the logo is intended to always be displayed against a light background.

Collaborating with Rohan Puri on the UI and UX on this beta for Chroma, the two of us were invited to speak together about our process and design thinking at the Harvard innovation lab: