This mural was created for the Currier House undergraduate residence at Harvard College during my time as an undergraduate with the following rationale behind its design an implementation:

With the proper drive and inspiration at Harvard, there are many sprouting opportunities for learning and personal growth. Growth is represented here by a tree of knowledge, which branches out to pondering the stars light years away and beyond. If the sky is the limit, then the sky, like the universe, is expanding and accelerating with each passing moment.

The “@” symbol alludes indirectly to the importance of computing, which holds special resonance for Currier because Bill Gates and Steve Balmer were Currier residents before dropping out to found Microsoft.
The tree of knowledge is fueled by passion–here symbolized by the heart. But the heart as an organ also fuels the mind with the oxygen it needs to function, and so the red and blue color scheme refers to the circulatory loading of the blood. The branches of the tree are arterial and warped with folds like the brain and is divided into two hemispheres with the gap between representing the corpus callosum, the bundle of neural fibers which facilitates communication between the two lobes of the mind.
But also represented are the two lobes of the college, the faculty of the arts and sciences. The Harvard crest pushes the tree outward to expand its bounds. The ivy leaves draw new life into the heart. The silhouettes and the constellations on the left refer to the sciences while those on the right refer to the arts.
On the left, the iconic evolutionary progression of man is broken up by two figures turned on a campfire. Housemaster of Currier House, Richard Wrangham, posited that the advent of fire and cooking is a pivotal aspect of what makes us human. Cooked food was easier to digest and had more calories, enabling the shrinking of the gut in favor of a more biologically costly larger brain. And perhaps with the cooking and the waiting, fire too contributed to the development of the social component of what defines us as a cooperative species–and Currier as a community.
To the right of the cooking figures is juxtaposed a spiritual evolution with the figure of Adam symbolically picking the forbidden fruit off the tree of knowledge. And that fruit, in turn also waits to fall upon the seated figure of Newton who will come to understand the gravity of knowledge inherent in the apple.
On the right, the cellist refers to Yo-yo Ma, who at one time was a resident of Currier House. Beyond him are a series of collaborative creatives with a painter depicting the dancer before him and a photographer capturing the figure toting an Oscar.
And yet for Currier, the tree is also the symbol and mascot of the house. The mural’s location is placed at the literal heart and center of the house with the compass rose pointing to the locations of Currier’s own cardinal directions, the four main towers that compose it–Tuchman, Bingham, Gilbert, and Daniels. In addition to the four towers, Currier has a lone ten-person suite located over the main lobby and it is for this reason there are ten silhouetted figures above the compass rose but beneath the shielding branches of the tree. 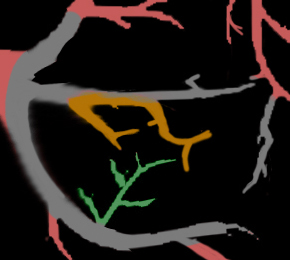 Continuing with references to the house’s spaces, in the lower right of the tree are a cluster of branches that form a fish feeding from the surface of a bowl with a piece of kelp sprouting from the tank’s base. Highlighted in the excerpted image for reference, this hidden image refers to the “Fishbowl,” what residents call the glassed-in room located behind the mural that features an opening at its top with a walkway around it. 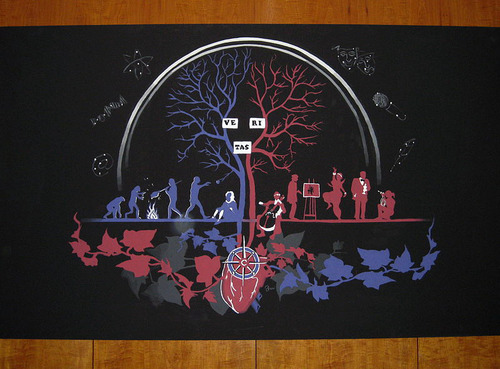 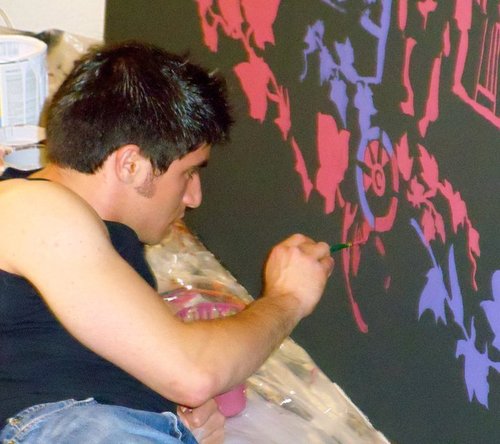 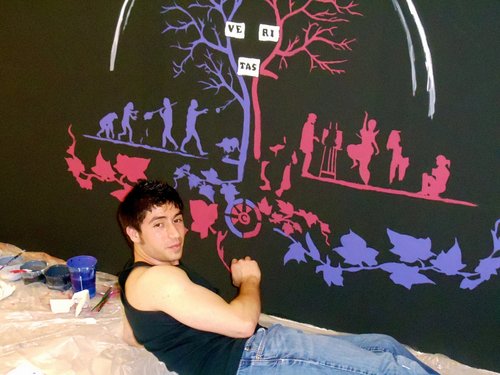 The work in progress. Photos by Jeremy Hoon.