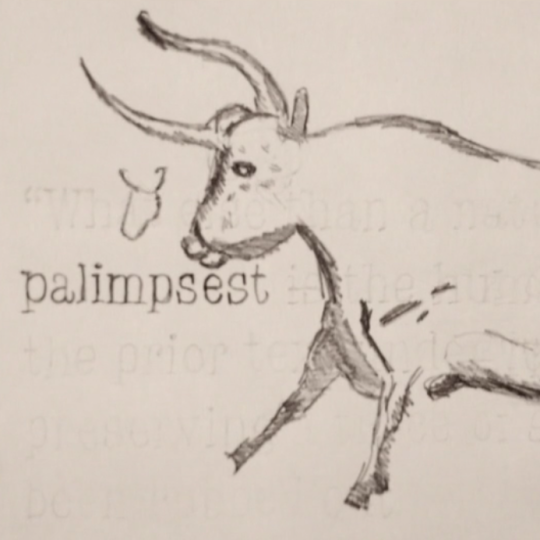 Palimpsest: A History of the Written Word

A palimpsest is a manuscript page, from a scroll or book, in which the text has been scraped or washed off so the page can be reused for another document. When my colleague Matthew Battles undertook an account exploring the many transfigurations inherent in the history of the written word, it was an apt metaphor. In undertaking an animated trailer for his book, scraping a series of ideas from its own respective pages, I sought to keep the same metaphor alive by approximating a literal palimpsest-generating process.

Using a copy stand for level down-facing image capture, I designed a series of frames in Photoshop that would keep the world “palimpsest” compositionally present throughout the animation with the words and images surrounding it writing and erasing themselves. Where possible, I tried to let the grooves of text and images inform future frames. For example, the outlines of a wax tablet would later resurface at the outlines of a computer monitor.

Next I used these Photoshop layers as guides that I traced and photographed through stop motion animation. With a Panasonic GH4 controlled remotely from an iPad, I used the onion-skinning feature to make sure each frame was aligned closely to the last. Nonetheless, there was variability in the alignment of the frames, which I stabilized with a batch auto-align process in Photoshop. Later, I reintroduced some shake artificially but with a consistent interval and drift (unlike the initial capture which had a good deal of random movement).

Lastly, before recording Matthew for an accompanying voiceover, I recorded a number of writing sounds with different media: pencil, pen, marker, a keyboard, typewriter, and charcoal. From this source material, I built up a rhythm and added in the sounds from my accordion—the breathing of the bellows and a bass note crescendo. The idea with the soundtrack was to carry through the theme of media overwriting and replacing each other and replacing one another over the course of the temporal landscape.

Check out the final piece above and also be sure to check out Matthew’s book,Palimpsest: A History of the Written Word.